I am joyfully married. I have a beautiful teenage daughter, a great dog and 3 dastardly cats. I love to write horror stories in all forms. I love movies, especially bloody ones. I also love romantic comedies. I also enjoy forensic shows, true crime stuff, crime procedure fiction and soap opera's. I am addicted to music. I love all kinds. I have a serious crush on Quentin Tarantino and Uma Thurman.


I absolutely adore this movie. Christian Slater at his finest and Patricia Arquette at her very cutest (while also being tough as nails). This is a different kind of love story, a romance only the great Quentin Tarantino could write.

Bored, lonely Elvis obsessed Clarance is celebrating his birthday alone in the theater watching A Sonny Chiba film when he first meets Alabama. After spilling popcorn on him they watch the film, get pie and than he shows her the place where he works. Sparks fly between the two and they make love.

What seemed like a chance encounter was something else. Alabama comes clean the morning after and tells Clarance that she is really a call girl that his boss had hired to be his date. She then announces her love for Clarance who quickly tells her that he loves her too. Their second date is at a wedding chapel. They are completely adorable coming out of the courthouse as Mr. and Mrs. Worley.

Things are not all smooth sailing for the newlyweds though. Clarance must sever Alabama's ties to her pimp and get her stuff back. He is guided by the spirit of Elvis (Val Kilmer in gold lemay) who gives him a pep talk. When he arrives at the address he is introduced to pimp Drexel Spivey (Gary Oldman in a hilarious turn as a white man who thinks he is black).

The encounter soon becomes violent as Spivey makes it clear that he will not let go of Alabama. Clarence takes a beating but luckily our hero gets the upper hand on the dreadlocked villain and shoots him dead. Clarance picks up what he thinks is Alabama's suitcase and gets the hell out of dodge. The couple quickly realize his mistake when they find a lot of cocaine instead of clothes in the case.

Clarance decides that the only way for him and his love to have a fresh start is to go to Los Angeles and sell the cocaine. What he doesn't know is that the coke belongs to a very mean crime boss who is hot on their trail. Clarance borrows some money from his dad (played to perfection by Dennis Hopper) and takes off with his new bride.

Sadly, as he and Alabama are making there way to the west coast mob associate Vincenzo Coccotti (The always brilliant and scary Christopher Walken) comes to visit the other Mr. Worley. Vincenzo wants information that dad refuses to give. Mr. Worley knows that torture awaits him so he infuriates Mr. Coccotti with a story about his Sicilian heritage (a hilarious story about eggplants) that leads to him getting shot in the head.

Meanwhile, Clarence and Alabama have made it to California where they hook up with his old buddy, Dick (Michael Rapaport) and his stoner roommate played by Brad Pitt. After checking into a hotel, Dick introduces the duo to an agent friend (Bronson Pinchot) who in turn offers to introduces them to a producer who might buy the coke.

While waiting for Clarance at the hotel room Alabama gets an unpleasant surprise when a mob goon (James Gandolfini) presents himself and asks for Clarence and the coke. Alabama is not about to rat on her true love and takes a vicious beating. Just like Clarance though she gets the upper hand on the gangster after stabbing him in the foot with a corkscrew. She performs a cuda gra with the top of the toilet tank smashed into his fat head.

Clarence finds her and helps his love. They later go to meet the producer but things soon go from bad to worse. They do not realize that their contact (Bronson Pinchot) got caught with the sample of the coke and plans to wear a wire to the meeting. As they reach the hotel suite of the producer the police and the mob converage to take them all down.

In an equisite scene of rapid gun fire, blood and death the cops, the mob and the private security for the producer have a massive shoot out. It looks like everybody is done for and tragedy seems sure when Clarance is hit. Fate is still with the young lovers as it is only a flesh wound. They manage to escape the forces against them and head for Mexico with the money. The movie ends with the duo on the beach with their son, Elvis. This happy ending was reportedly different from Tarantino's script but I liked it. 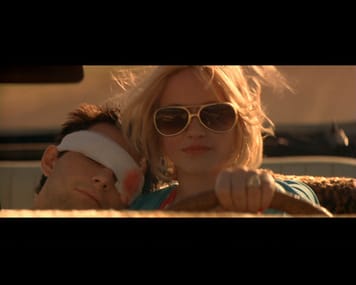 0 comments, Reply to this entry

When 1 Scene is More Than Enough. (13 movies items)

"Great list. I haven't met too many people who have seen Calvaire. That dance scene was the creepiest most surreal moment I can ever remember in a film. Also glad to see Scream get some love. It is one"

"Amen. He is an incredible and versatile actor. One of my favorites. Of course Drexle is my favorite. I love True Romance."

"Great list. I think he is really cute and I love his character on house."

"Love his movies. My favorite is Audition. Great list."

"I still have this system and some of these games. They are still fun. Great list. "

"Great list. I am a big fan of both these guys. Their movies really kick ass."

"Great list. When Harry Met Sally is in my top two favorite movies of all time."

"Great list. Piper Perabo is adorable. Rocky & Bullwinkle is one of my favorite guilty pleasures."

"I agree with your list except for Stewart. Twilight sucks but she has done well in other films."

"Interesting list. Great info. P.S. I am probably weird but I think the scar on Phoenix is sexy :-)"

"Great list. I love Tarantino and these are some great grindhouse films."

"Martinez is from France and his mother is French but his father is Spanish."

"Great list. Those are some great movies. Some of those I didn't realize where based on real life. Good job."

The Men Behind the Fear (23 person items)

"It is just my personal opinion. If people are happy without faith than I am glad for them. I just would not want to live without God in my life. I don't think that makes me delusional or a part of any"

"Interesting list. I always feel bad when I learn that someone is an atheist. I think it would be a very sad and empty way to live."

"Those are very cute girls. I just adore Zooey."

Villiana
Posted: 9 years, 5 months ago at Dec 7 10:44
Hi, following the spirit of Christmas I create two new lists - a list of favorite Christmas movies and favorite Christmas songs on Listal. If You want to take part in the voting... I invite. Have a nice day.

luuhs
Posted: 9 years, 6 months ago at Nov 8 1:26
Hi there and sorry to bother you, but, would you have any interest in taking part of a competition I'm hosting around here? I already thank you for your attention in advance! =]

Zenn
Posted: 9 years, 9 months ago at Aug 14 9:19
Thanks for voting and commenting on my list.
I always appreciated "Scream" (and Wes Craven in general); as for "Calvaire", it's an interesting movie, I discovered it while 'exploring' the "French Horror Nouvelle Vague", I also did a list about that, check that out, if you know that movies, I'm always looking for suggestion since I know relatively few movies from that 'movement'; if you don't, well, maybe you'll appreciate a couple of 'em.
www.listal.com/list/la-nouvelle-vague-du-film

(I may have asked you this already earlier, in this case, apology for the inconvenience!)